Judging by the charts of the main crypto instruments, the bears are still at the wheel. However, it should be noticed, that the angle of the decline is becoming less and less steep every day, which means a certain weakening of the trend. The picture on the charts may be hinting that the long but not renewing the minimums downtrend may soon change for a surge of buying and growth of the quotations. The most discussed topics on the crypto market are:

On D1, the descending channel of the current trend looks stable and confident. In the short term, however, the dynamics of the quotations is slowing down. The decline has stopped near 61.8% Fibo in relation to the previous trend of growth. If the downtrend develops, the nearest goal will not only be at the support line of the current channel but also 76.0% ($5426.60).

On the MACD, there is a convergence forming, indicating an upcoming pullback, but most likely after reaching the target level. The first goal of the correctional growth will be $8550.00. 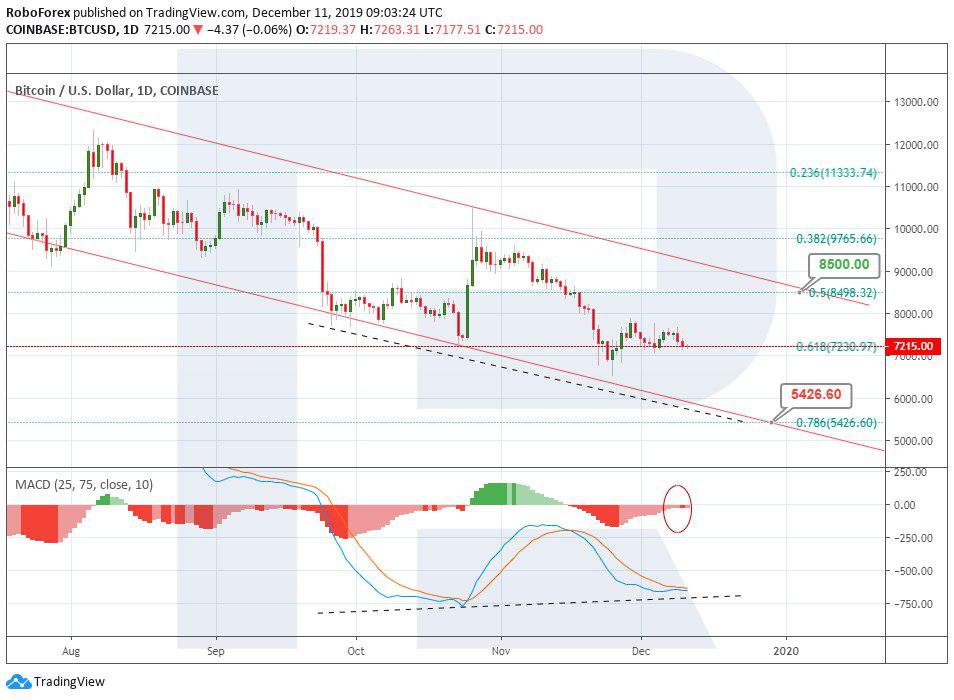 On H4, after a short-term correction, the quotations started moving to the support level of $6526.00. The wave of decline is developing inside a strict channel. The local goal of the decline may be the support line and $6873.00. 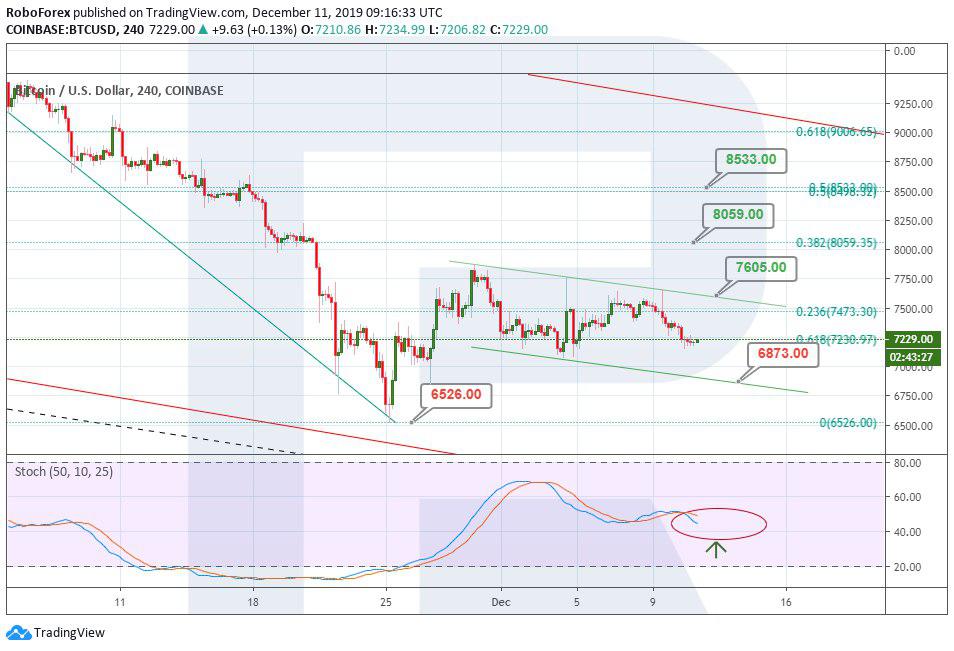 On D1 of the Ethereum, the moods are still bearish. Locally, there is a correction after a swift declining impulse. The quotations are developing a downtrend inside a neat channel. The main goal of the trend is the fractal support level of $81.00. But before testing the main goal, the quotations may decline to the support line at $94.27, and under the influence of a convergence on the MACD — bounce to the resistance line at $167.65. 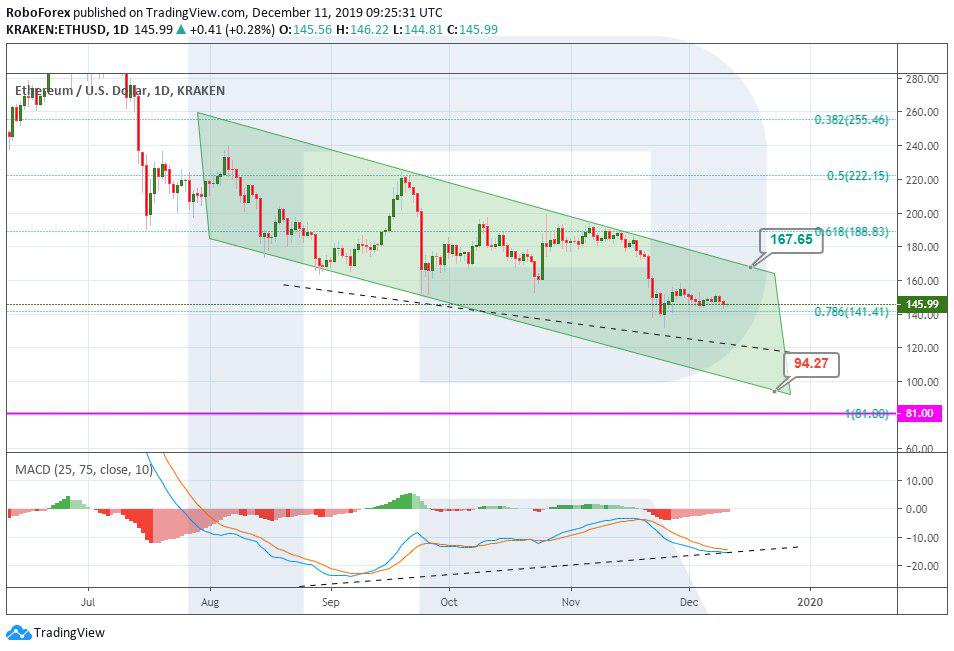 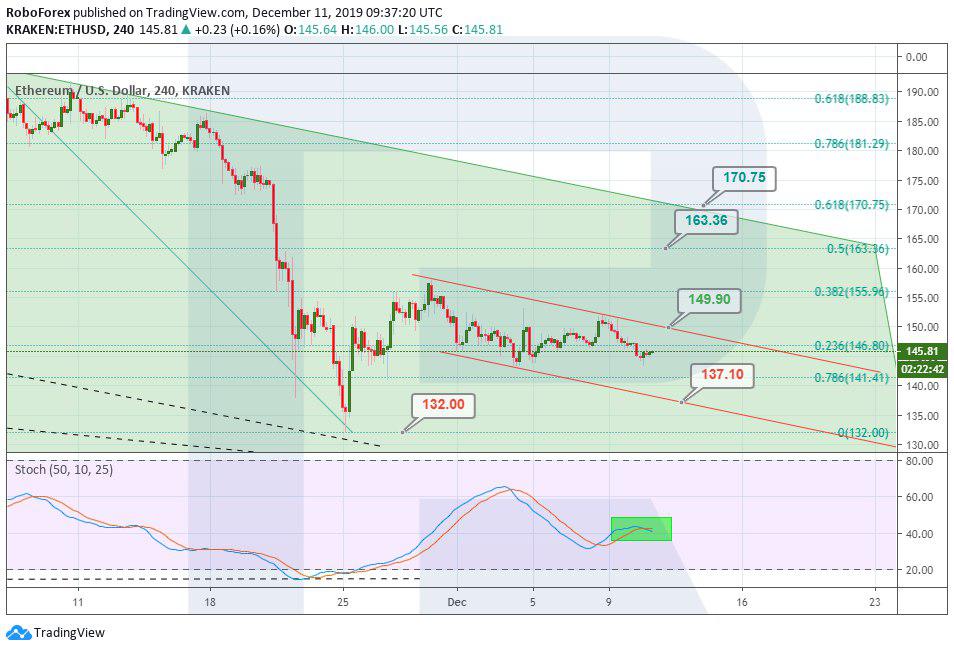 On H4, the cryptocurrency demonstrates the development of another declining wave after a short pullback to 23.6% Fibo. The nearest goal of the decline is the minimum of $42.16, but after it is broken out, the decline may continue, which may be signaled by a Black Cross on the MACD. A breakout of the local resistance line at $45.30 should not be excluded. This will open a pathway to 38.2% ($51.33), 50.0% ($54.15), and the main resistance line. 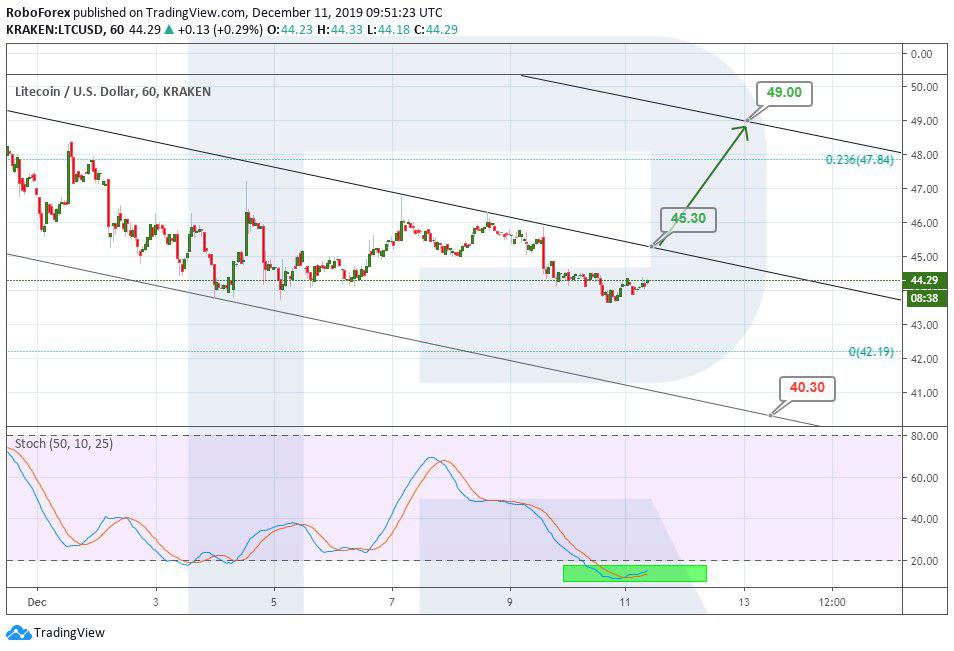 On H1, the minimums are tested with the possibility of growth to the resistance line of the short-term channel. The potential growth may also be signaled by a Gold Cross forming in the oversold area of the Stochastic. A breakout of $45.30 will give a pathway to the upper projection channel to $49.00. 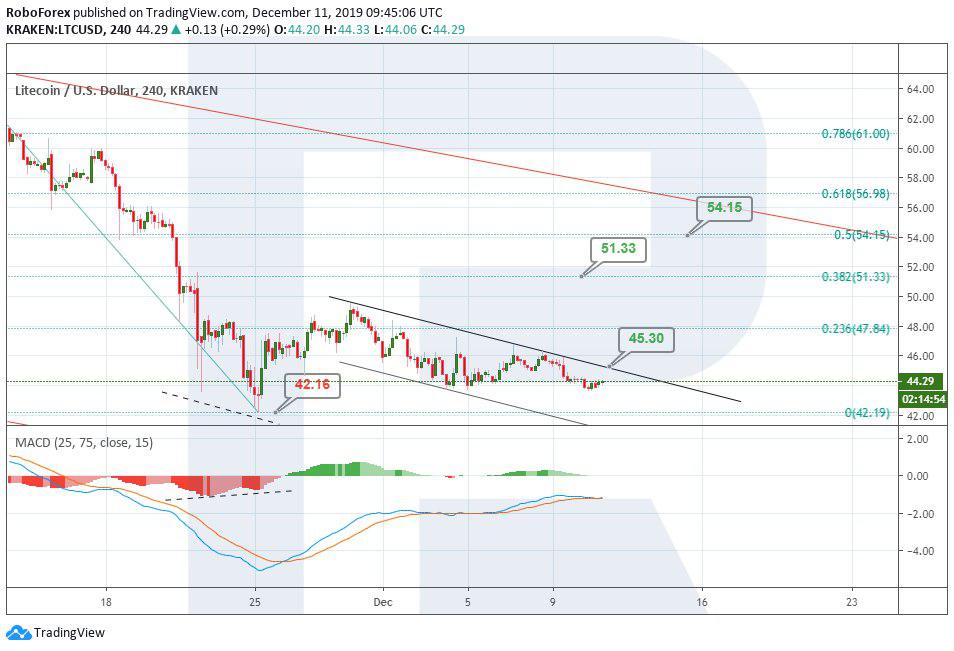 On D1, the downtrend is slowing down, judging by a convergence forming on the MACD. Regardless of this, another declining impulse may reach the fractal support at $0.1290. After that, growth to the resistance levels of the short-term and the main channels at $0.2555 and $0.3050, respectively, may follow. 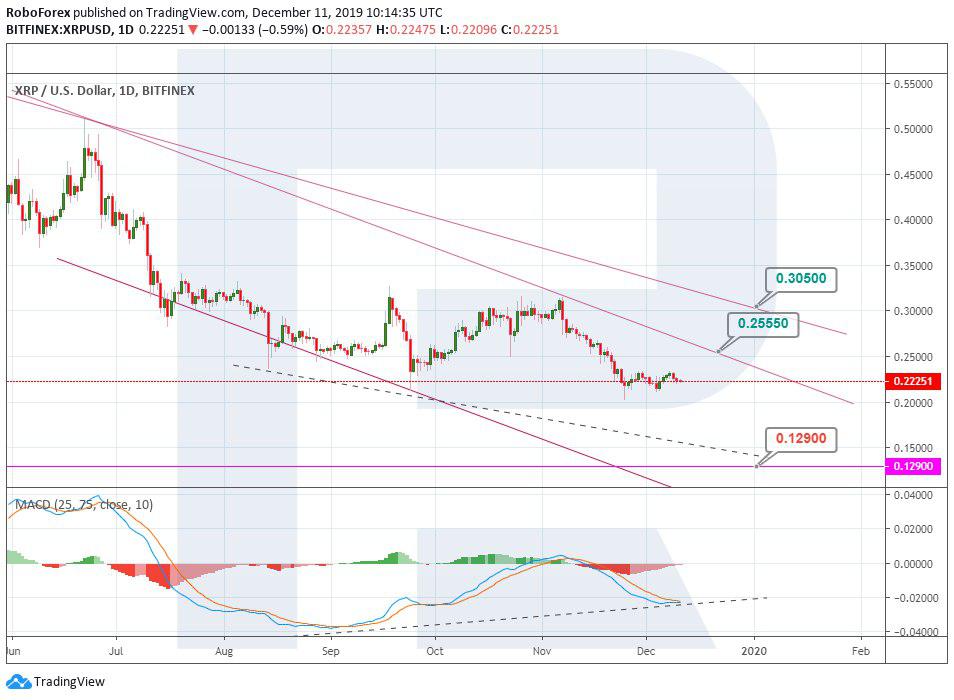 On H4, there is an upward correctional channel in relation to the previous declining impulse. A bounce off the local support $0.2172 and the growth to 38.2% ($0.2454) and $50.0% ($0.2587) are not excluded. A breakout of the resistance level will let the currency test the minimum of $0.2025 and perhaps overcome it. The breakout is supported by a Black Cross forming on the Stochastic. 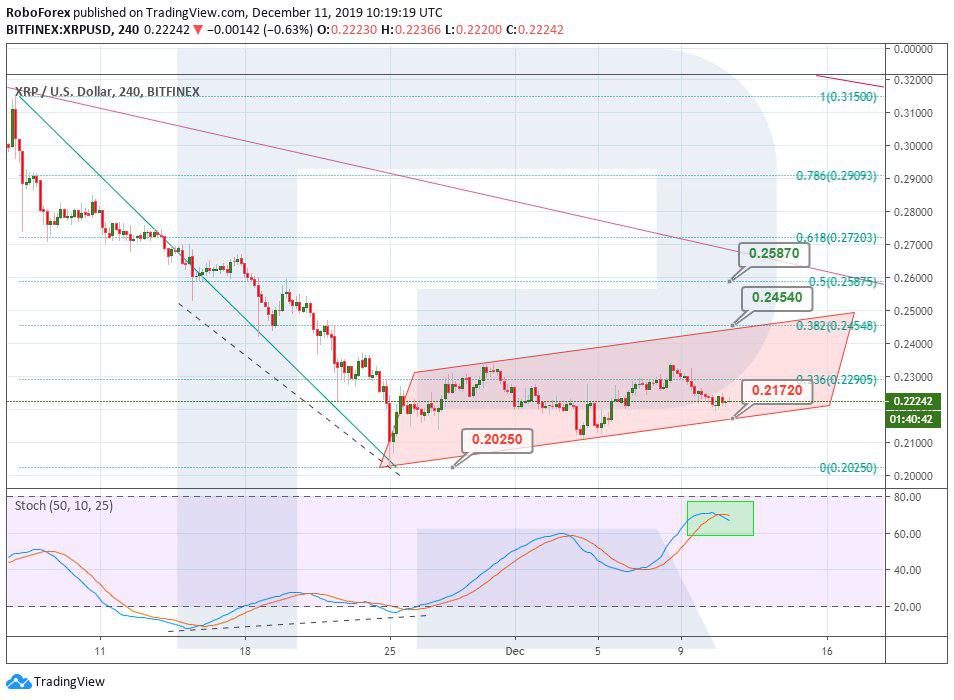 On H4, there is a correctional growth after testing of a mid-term minimum. As long as the downtrend is the main trend, we should expect a decline рto the post-correctional extension area of 138.2-161.8% ($1.92-1.62) Fibo. Indirectly, further decline is supported by a Black Cross on the MACD. 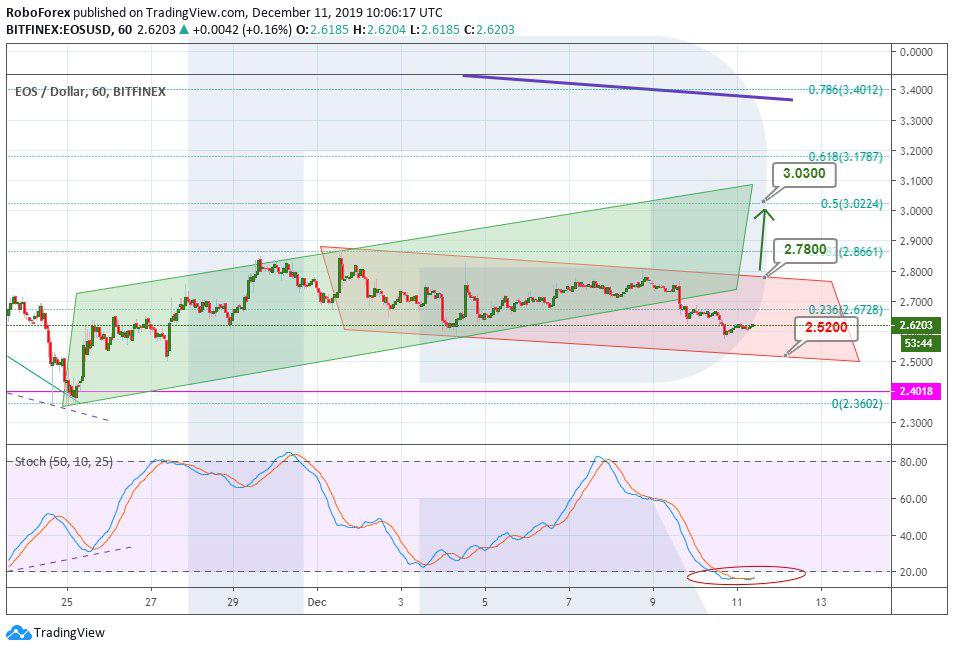 On H1, the correctional phase is reversing. The quotations are aiming at the local support of $2.52. At the same time, keeping in mind the Gold Cross in the overbought area of the Stochastic, a test of the support line, followed by further growth to the resistance level and $2.78, might follow. A breakout of this level may extend the correction to 50.0% ($3.03) Fibo. 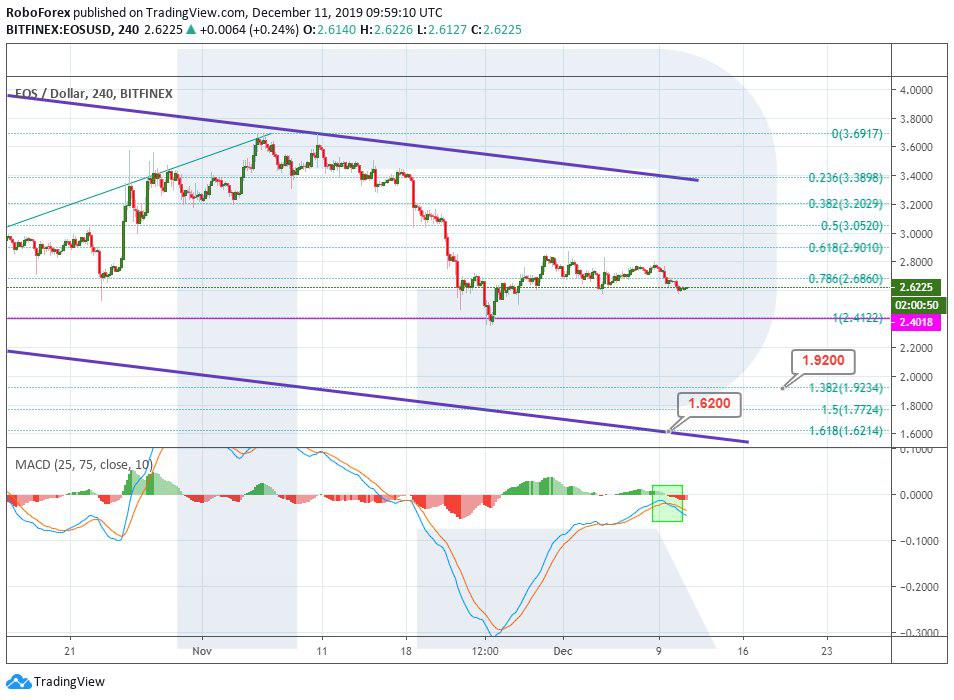